France’s ambassador to the UN has urged the Security Council to impose sanctions on the people involved in Libya’s slave trade of African refugees and migrants.

Francois Delattre’s comments come as human trafficking in Libya has become a burning topic since a CNN investigation produced footage of West Africans being sold at slave markets in November.

“France will propose to assist the sanctions committee … in identifying responsible individuals and entities for trafficking through Libyan territory,” he told the council on Tuesday.

The UN Security Council held an emergency session to discuss the possibility of sanctions against individuals and entities, and of applying the full range of international law including the use of the international criminal court – but the session ended without resolution.

The head of the UNHCR has called for funds, in addition to words, to fight the modern-day slave trading.

“We count upon support of the members of the council to make headway to that end.”

A sanctions programme set up in 2011, the year of the US-supported invasion of Libya which saw the overthrow of long-time leader Muammar Gaddafi, allows the Security Council to place sanctions on “individuals and entities involved in or complicit in ordering, controlling, or otherwise directing, the commission of serious human rights abuses against persons in Libya”.

Slavery and human trafficking have been present in Libya for years.

“This has been going for quite some time,” Omar Turbi, a Libyan human rights defender, told Al Jazeera.

Even under Gaddafi, Libya “struggled” with arms trafficking, drug trafficking and human trafficking, according to Turbi, who has worked with the US government to save lives in the North African country.

Libya descended into a civil war in 2014 and is widely considered a failed state.

There are competing governments – the National Transition Council recognised by the UN and the Khalifa Haftar government which controls more territory – and the presence of groups such as the Islamic State of Iraq and the Levant (ISIL) group and al-Qaeda that control large expanses of territory. 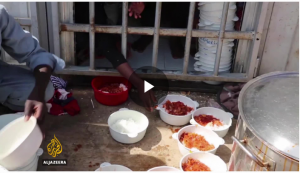 Other members of the Security Council have condemned modern-day slavery in Libya.

The FBI believed that a former campaign advisor to Donald Trump was “collaborating” with Russia as it worked to influence the 2016 presidential election, top secret documents released to US news organizations have revealed. The US president hit back Sunday, portraying the wiretapping of his ex-aide as part of a partisan and “illegal” conspiracy because Read more

Reports say that in spite of sanctions on North Korea, Russian tankers have continued to supply fuel to the secretive communist country. Russia is accused to have supplied fuel on at least three occasions in recent months by transferring cargoes at sea. Reuters credited the report to two senior Western European security sources. The security Read more

U.S. President-elect Biden appoints another Nigerian into his cabinet

Amotekun takes off in Ogun, ex-CP announced as Commandant