Nigeria’s Super Eagles come from behind to beat the Indomitable Lions of Cameroon and picked the quarter finals ticket of the 2019 African Cup of Nations in Egypt.

The Nigerian team took the lead after Odion Ighalo scored early in the first half before being pegged back and going behind within three minutes.

Goals from Ighalo and Alex Iwobi within three minutes after the hour mark restored the Super Eagles’ lead and gave them the all-important victory. 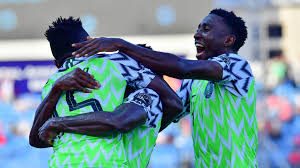 Nigeria will now on Wednesday meet the winners of the fixture between hosts Egypt and the Bafana Bafana of South Africa, which will be played hours after the Super Eagles – Indomitable Lions clash.

Roger Martinez and Duvan Zapata put a dent in Lionel Messi’s hopes of finally landing a major international title as Colombia began their Copa America campaign with a 2-0 win over Argentina on Saturday. Martinez struck a stunning opener on 72 minutes and fellow substitute Zapata sealed the win three minutes from the end after Read more

The Italian club’ stocks closed a whopping 11 percent up after news broke that the striker has agreed on personal terms to move to Turin News that Cristiano Ronaldo is close to a sensational move to Juventus sent share prices at the Italian club through the roof on Thursday. Goal understands that the Real Madrid Read more

FIFA officially clears Ola Aina to play for Nigeria Hull City defender Ola Aina could make his international debut for the Super Eagles on Monday against Cameroon in Yaounde after his international clearance came through from the World governing body, FIFA. According to Completesportsnigeria.com, the clearance makes Aina eligible for Monday’s Russia 2018 World Cup Read more

Kashamu: People can mourn me the way they like when I die – ex-President Obasanjo