This was disclosed at the signing ceremony held yesterday at the Civic Centre, Victoria Island, Lagos.

The event had the Governor of Lagos, His Excellency Babajide Sanwo-Olu, the United States Ambassador ably represented by Carol Cox, the Chairman of AISL Board, Ali Safieddine and other prominent persons in attendance.

While giving his speech at the event, the Founder/Chairman of James Hope College, Mr. Jim Ovia stated that the College would continue to offer full scholarship based on merit, to 40% of all the students that would be admitted into the school.

With the acquisition of this property, James Hope College is set to replicate in Lagos the outstanding academic performance it is known for. More importantly, the offer of full scholarship to 40% of the students on merit ensures that the school’s equal opportunity model of academic excellence is extended to all students regardless of their state of origin. 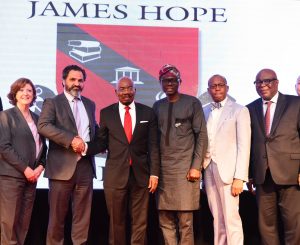 James Hope College Lagos will open its doors to students in September 2020.

A look back at Nigeria’s success in battling AIDS

Nigeria is home to one of the world’s largest populations of people living with HIV. And while health care workers in the country are often strapped for resources and don’t have access to the latest medications, they have made significant progress in the fight against the virus, according to Phyllis Kanki, professor of immunology and infectious diseases Read more

The Ogun State Chapter of the Peoples Democratic Party (PDP), under the Chairmanship of Hon. Sikirulahi Ogundele has assured the people of the state that Hon. Ladi Adebutu would still be substituted with Senator Kashamu Buruji, representing Ogun East at the Senate, as the governorship candidate of the party in the state Ogundele said in Read more

The Ogun State Government at the weekend said it is addressing the agitation of the people of the Central and Western Senatorial Zones to have a university cited in their domain. Governor Prince Dapo Abiodun made this known at a one day stakeholders forum with the theme, “Repositioning Education for Outstanding Performance”, held in Abeokuta. Read more

Nigeria may plunge into another recession – Minister of Finance

BREAKING: APC implode as nPDP breaks away to form R-APC